“Half of the people I know in the energy industry have lost their jobs.”

Let’s put it this way: He’s been around a long time, and he knows a lot of people. Many in our industry have suffered complete wipeouts of all of their investments and savings—three times. Five or more years of hard work have left them with nothing to show for it—three times. In every case, these losses were (mostly) unrelated to individual performance or anything within their control.

In Talent versus Luck: The Role of Randomness in Success and Failure (Alessandro Pluchino, Andrea Raspisarda, and Alessio Biondo), scientists examined circumstances similar to those witnessed during the Three Crashes. They modeled a group of people with varying degrees of talent (representing hard work, experience, intelligence, etc.), assuming that each person had a lifelong career of 40 years. In the model, each individual’s wealth increases at a rate based on their talent. More talented people make more money. Less talented people make less money. In a perfect world, the most talented individual ends the simulation as the wealthiest, and the least talented as the poorest.

That is, until they introduce luck. Every six months, a person has a chance of encountering either a lucky event or an unlucky event. A lucky event doubles an individual’s wealth, and an unlucky one halves it. The results are dramatic. The most talented individuals are no longer the wealthiest. The graph below plots the individuals (green dots) based on (1) talent (the higher the dot, the more talented the person) and (2) wealth (with wealth increasing from left to right):

On the far left is depicted the poorest person, who was in the 74th percentile of talent. On the far right is the wealthiest person, who was at only the 61st percentile of talent. How is it possible that a person with more talent than the winner ended up in last place? It all comes down to bad luck. The below image shows how the good- and bad-luck events experienced by these individuals drove their wealth upwards and downwards: 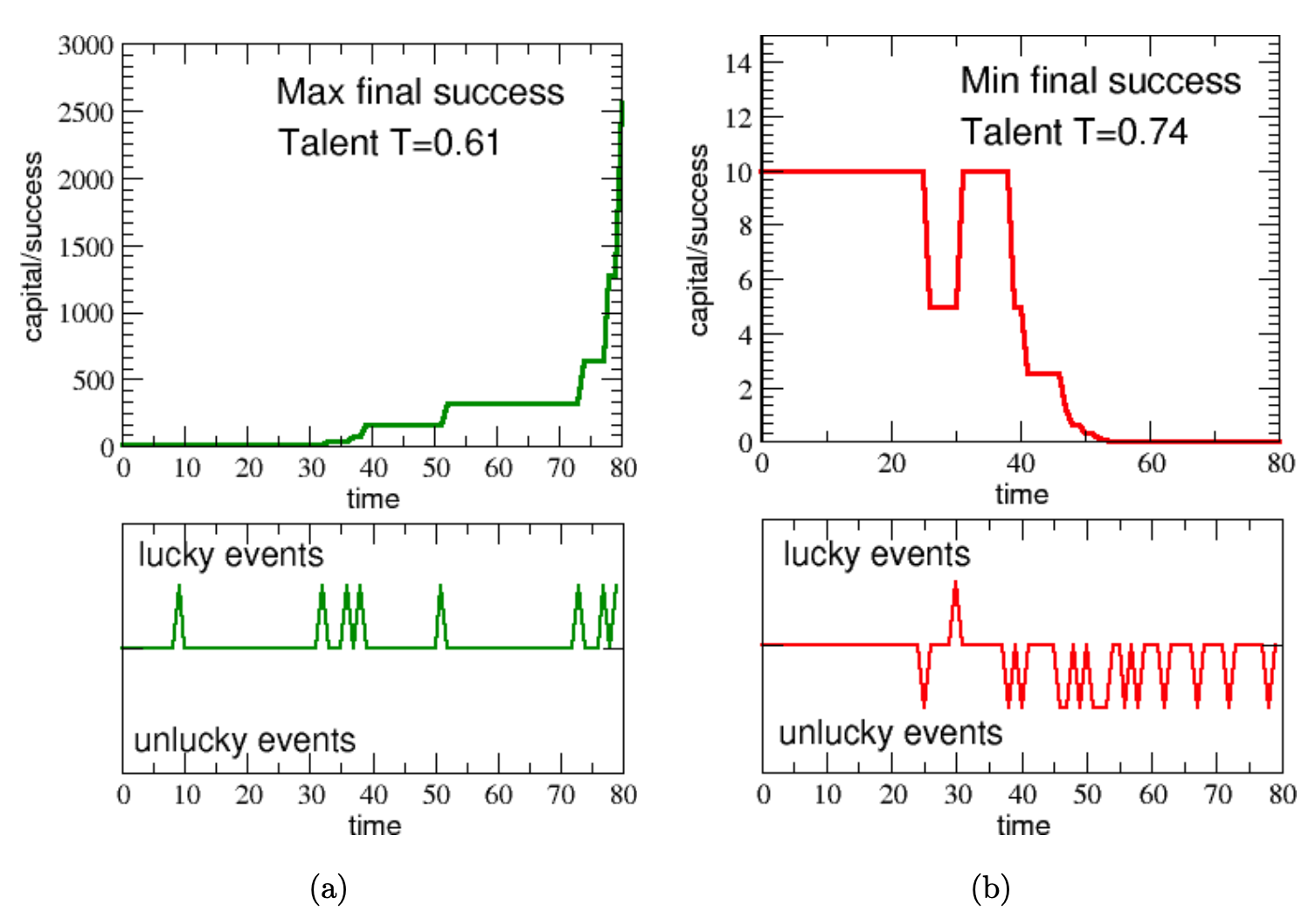 A similar series of macro events has occurred in the energy industry over the last decade. A handful of lucky people were beneficiaries of buyouts (between the crashes), but many more talented people were crushed by the Three Crashes. In mid- or late-life, it’s less likely that someone has enough years to rebuild this much lost wealth. As the authors observed, “even a great talent becomes useless against the fury of misfortune.” There are a lot of people in the energy industry sharing that sentiment right now.

What the study failed to address is how much the frequency of lucky (or unlucky) events matters to incentives. Energy workers understand their industry is cyclical. But the increasing frequency of crashes should be cause for alarm. The greater role luck plays in wealth creation, the less likely it is that people will invest years of their lives in it. Those who do so likely will demand higher compensation—to make up for the more frequent crashes.

I grew up on the Texas coast, first living on the Corpus Christi Bay and then moving south, to Baffin Bay and the Laguna Madre. Every morning I woke to the beauty of the sun rising over the water. 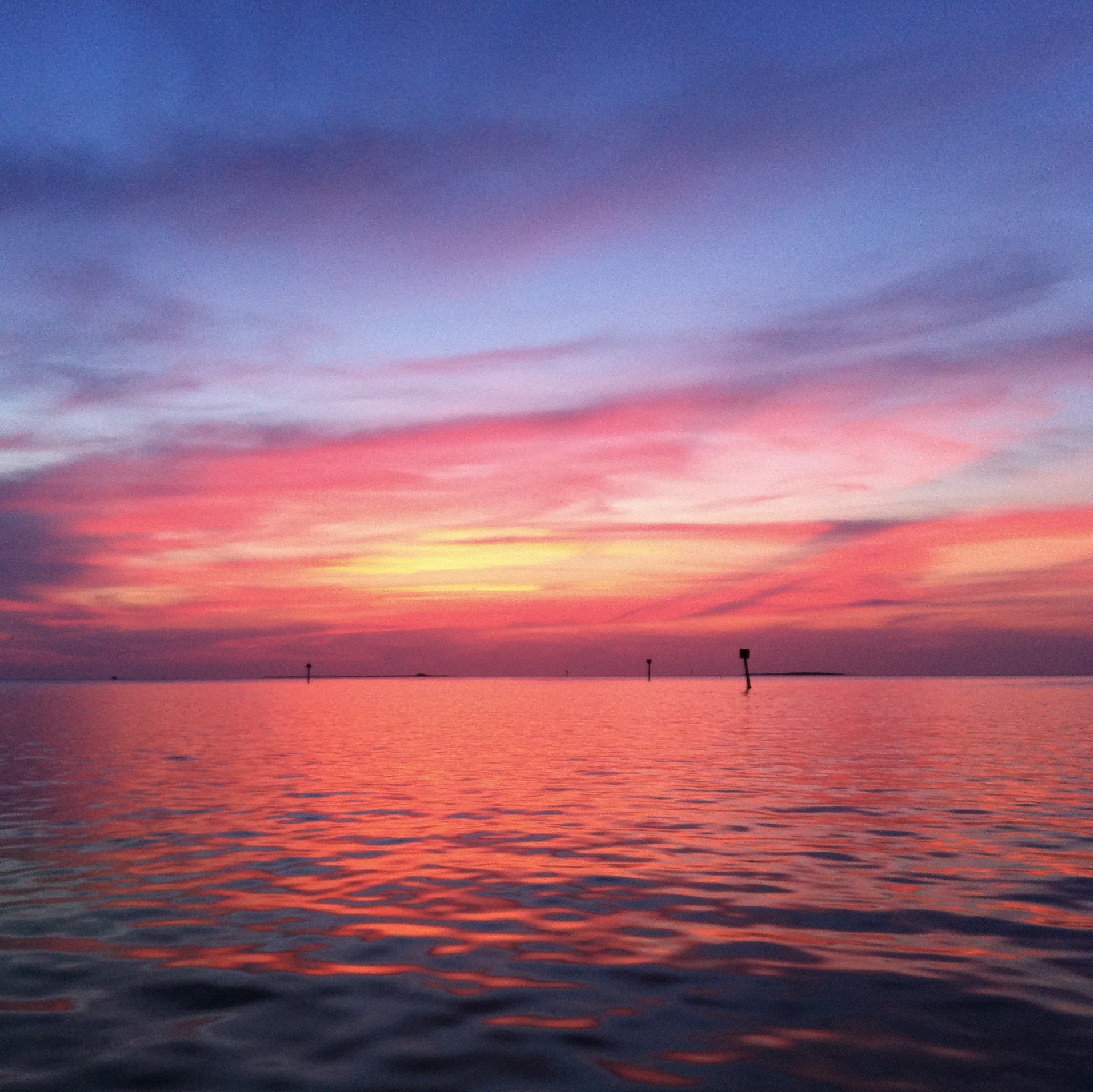 But we also lived with the risk of hurricanes. My first memory as a child is being sheltered by my parents under the dining room table as 180 mph winds rocked the house. When the eye passed over us, we looked up our stairs and saw blue sky where the second story used to be.

We rebuilt and stayed because the beauty of the bays and the freedom of the water made it worth the risk. After all, the probability of losing one’s coastal home to a hurricane is actually quite low. It happened to my family only one time in fifty years—not three times in a decade. And we had insurance to cover our losses.

Unfortunately, there was no insurance to cover the lost wealth of energy workers. Still, they have persevered and tried again. Maybe they are willing to take more risks because of what the industry means to them. It’s exciting to reach thousands of feet into the dark depths of the Earth and pull out resources to power our world. Energy is more tangible and real than many jobs people have now. But after the third crash, how many of them are going to come back?