More than six years after Muammar Gaddafi’s death, the violence in Libya continues.

“Libya is rife with rival militias and armed groups, some in competition with the internationally backed government.  Oil was trading at more than $65 (€55) a barrel after the incident, close to its highest price since mid-2015. . . . The pipeline is operated by a subsidiary of the National Oil Corporation (NOC) and a joint venture with Hess Corp, Marathon Oil Corp and ConocoPhillips. . . . Libya produces about 1 million barrels of per day, but production is often cut due to sabotage, politics and instability.”  Explosion at Major Oil Pipeline in Libya, dw.com (Dec. 26, 2017).

The impact of such attacks is evident in the nation’s recent production history: 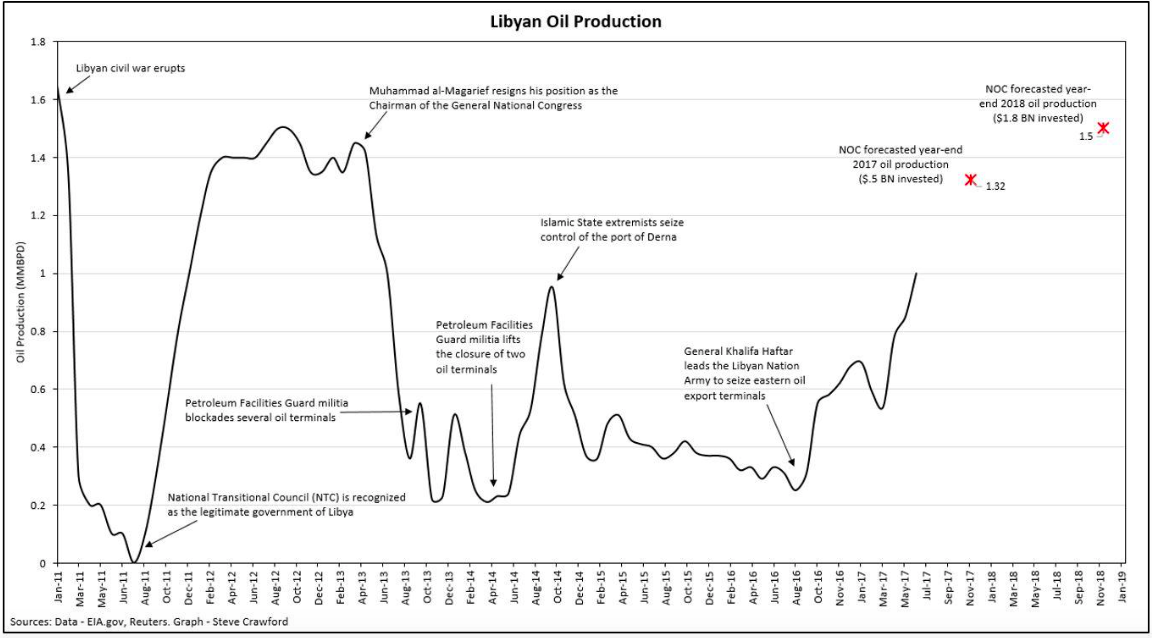 All of this started in 1969, when Colonel Gaddafi (then 28 years old) deposed King Idris and took over Libya. 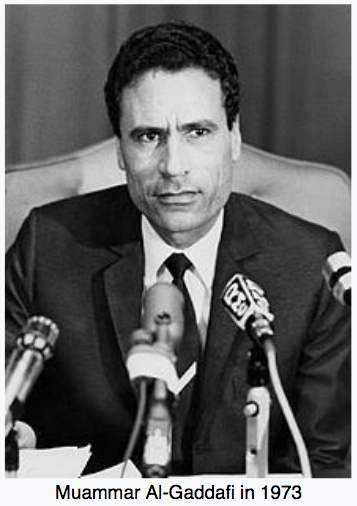 Most American oil companies—Conoco, Marathon, Amerada Hess, and Occidental Petroleum—managed to coexist and work with Gaddafi’s regime, but Exxon and Mobil eventually abandoned their Libyan assets in 1981 and 1982, respectively.

Things turned worse in 1986, when two American servicemen were killed and 79 were injured when a disco was bombed in West Berlin.  The United States blamed Libya for the attack, and President Reagan retaliated with air strikes and sanctions. The other American companies had to walk away from billion-dollar oilfields in the Libyan desert.  The best these companies could do was enter into Suspension Agreements—whereby Libya’s national oil company assumed all of the American companies’ Libyan obligations (e.g., operating the oil fields) in exchange for receiving all of their oil revenues.  When the Americans left, Libya got to keep all of the Americans’ oil for itself, which only further enriched Libya’s dictator. Eighteen years would pass before anything changed.

In 2004, Colonel Gaddafi finally reached a deal with the Americans.  He agreed to rid Libya of weapons of mass destruction and cooperate in America’s war against terror.  In exchange, the United States lifted its sanctions.

In the last three years of Libyan sanctions, I was responsible for looking after Occidental Petroleum’s dormant Libyan contracts, and then afterwards, with transitioning them back into operations.  I spent much of 2004 shuttling back and forth between Libya and Malta.  In the process of working with the Libyans, I heard many stories of Gaddafi’s decadent lifestyle and brutality.

A journalist I knew went to interview Gaddafi just after the sanctions were lifted. She was escorted to a private room and left there alone, waiting for him.  Then the Colonel entered, wearing a green velour leisure suit unzipped to his bellybutton.  He was smiling broadly and holding two martinis.  Gaddafi offered her one, which she accepted but only pretended to sip–fearing it might be drugged.  My friend tried in vain to interview the Colonel, while he pursued her around the room, repeatedly groping her.

The journalist was lucky to have escaped:

[I]n April 2004, Gaddafi was visiting a school in his home town of Sirte, on the Mediterranean coast 350 miles east of Tripoli.  She had no idea that the pat on the head, seemingly so paternal, actually signified something far more sinister. The car arrived the next afternoon. The girl was working at her mother’s hairdressing salon when in walked three women, one of whom was dressed in a military uniform. The women told the girl’s mother that her daughter was needed to present another bouquet to ‘Papa Muammar’ because she had conducted herself so ‘beautifully’ the previous day. Despite the mother’s protestations, the girl was driven away at high speed to an encampment in the desert. There she was once more introduced to Gaddafi, who was sitting in a red chair holding a TV remote control. He looked her up and down and barked to one of the women: ‘Get her ready!’ Now terrified, the girl was taken away and undressed. . . . Guy Walters, The Terrible Truth about Gaddafi’s Harem: How Libyan Dictator Kidnapped and Raped Dozens of Women to Fulfil His Perverted Desires, Daily Mail (October 23, 2013).

In another gruesome story, the husband of one of Gaddafi’s victims complained.  Gaddafi had him executed by tying each of his arms to cars and sending them in opposite directions.  He literally ripped the poor man apart.

The end of Gaddafi’s life was similarly violent.  The Colonel’s last moments were spent hiding in a drainage pipe, before he was pulled out, tortured, and summarily executed.

What’s in store for Libya in 2018?  Rising from the ashes of Gaddafi’s fallen regime is Khalifa Haftar.  Haftar participated in the 1969 coup and led numerous military campaigns for Gaddafi before turning on him:

In March 1996, Haftar took part in a failed uprising against Gaddafi in the mountains of eastern Libya. . . .  Haftar moved to suburban Virginia outside Washington, D.C., living in Falls Church until 2007. He then moved to Vienna, Virginia. From there, and mostly through his close contacts within the American intelligence community, he consistently supported several attempts to topple and assassinate Gaddafi.  Wikipedia.

Libyan strongman Khalifa Haftar has said he will support 2018 elections in the war-torn country but also implied he would seize power if the polls did not occur.  Late on Thursday, Haftar said presidential and parliamentary elections were ‘a fundamental solution’ to Libya’s crisis and should be held ‘without delay or fraud’.  Oil-rich Libya has been wracked by chaos since a 2011 uprising that toppled longtime dictator Moammar Gaddafi.  A UN-backed unity government in Tripoli has failed to impose its authority nationwide, and has been rejected by a rival administration backed by Haftar in the east of the country.  This month, Haftar said the unity government had definitively lost all legitimacy after the expiry of the December 2015 UN-brokered agreement that gave rise to it.  ‘But the accord is one thing and the UN mission’s work (towards holding elections) is another,’ he told the Al-Hadath television channel on Thursday. Haftar’s opponents accuse him of wanting to seize power and establish a military dictatorship, while his supporters have called for him to take control by ‘popular mandate’.  Haftar said this ‘mandate’ could be a possibility ‘if all classic mechanisms allowing a peaceful power transition via free and democratic elections were exhausted’.  Libya Strongman Says Backs 2018 Elections, AFP (Dec. 30, 2017).

But Khalifa Haftar is not a young man.  At 75 years of age, his reign is unlikely to be a long one.