In 2003, China saw a preview of COVID-19 in the form of another coronavirus called SARS.  SARS struck Hong Kong and sent a wave of change across China.  Yet most Americans were oblivious to its existence.  At the time, though, I was traveling weekly in Asia.  I remember people talking about how they were going to buy their first cars and learn how to drive.  According to Bain & Company, this is exactly what happened:

Today’s Wall Street Journal offered some of the first evidence that a similar trend is playing out in the United States: 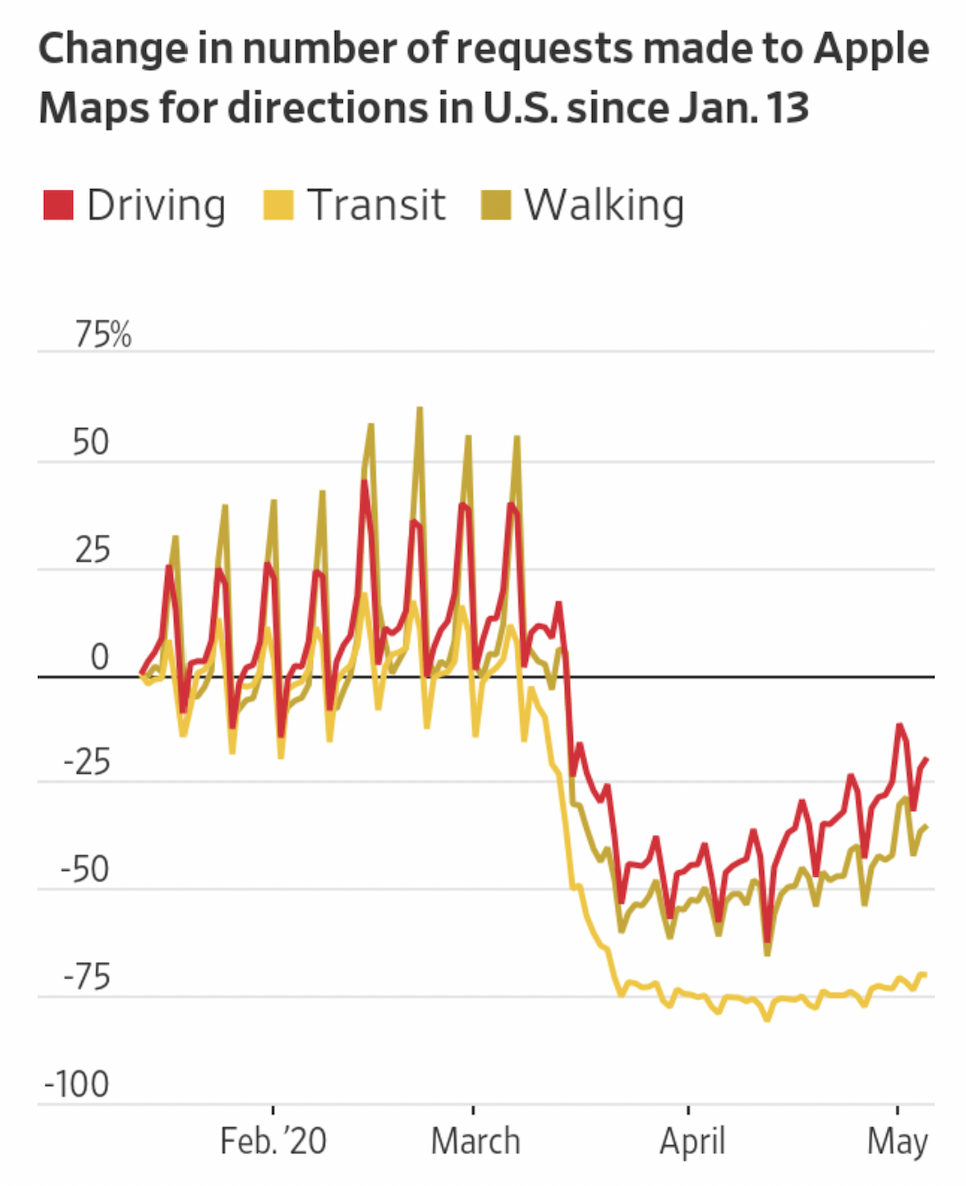 Note the divergence between the red and yellow lines.  The article explained that:

“[S]ome people will embrace driving over public transportation because of concern about coronavirus transmission, offsetting those who continue to work from home.”  Rebecca Elliott, As States Reopen, Thirst for Gasoline Returns (Wall Street Journal, May 8, 2020).

This trend may accelerate if scientific studies confirm that mass transit has been a major factor in COVID-19 transmission.  On April 24, 2020, Jeffrey E. Harris of the Massachusetts Institute of Technology released his results in a paper entitled The Subways Seeded the Massive Coronavirus Epidemic in New York:

“New York City’s multipronged subway system was a major disseminator – if not the principal transmission vehicle – of coronavirus infection during the initial takeoff of the massive epidemic that became evident throughout the city during March 2020. . . . Subway lines with the largest drop in ridership during the second and third weeks of March had the lowest subsequent rates of infection in the zip codes traversed by their routes.”

Foreign Policy had an article this week with similar observations:

“Expectations that oil demand would be throttled by climate policy will likely be disappointed.  The economic distress imposed by the pandemic risks undermining environmental policy ambition, as does the current shift to isolationism and away from the kind of global cooperation required for effective climate policy.”

And result in supply destruction:

“Oil supply, by contrast, will take longer to return as shut-in production is lost, investment in new supply is scrapped, and the U.S. shale revolution slows. . . .  [Shutting-in wells] risks damaging the reservoirs.  Some of that supply will never come back, and some will take substantial time and investment to bring online.”

On top of this is the possibility that there will be more demand for products made from petroleum.  There was a great Occidental Petroleum commercial that contemplated a world without oil and gas.  The commercial depicted a family watching as their belongings and most of their house (except for the wood) disappear around them.  Needless to say, disposable cups, plates, and cutlery will be on the ascendency around the world.  Many of these will be made from oil and gas.

The economic shocks of COVID-19 remind me of a conversation I had with the Nobel Prize-winning economist Ronald Coase in December 2009.  Professor Coase had been one of my professors at The University of Chicago Law School, and I was invited to join him for a luncheon celebrating his 100th birthday (pictured below).  I asked him for his thoughts on the recent financial crisis.  He explained that the markets were performing as they always had.  Professor Coase described the many crashes (and recoveries) he had witnessed over his century of living and others from the past he had studied.  Professor Coase observed that the only difference between then and now was the speed with which markets move, which he attributed to the interconnectedness of the world.  Because everyone has much of the same information at about the same time, it’s not unusual for the whole world to be hitting the buy or sell button simultaneously.  This leads to rapid market moves in both directions.  Whenever I hear someone predicting that low oil prices are here to stay, I think of  my lunch with Professor Coase.