Energy companies often do business in places that are not part of the Instagram travel circuit.  Visas can be difficult to obtain, and tourism is virtually non-existent.  These nations also tend to be home to extraordinary characters with unusual stories.  Whenever I travel to a new country, I enjoy visiting with its locals.  I always like to ask them:

“What’s the strangest thing you’ve ever seen or experienced here?”

The Republic of Togo is a West African nation sandwiched between Ghana and Benin.  In 2010, I made several trips there to negotiate a Production Sharing Agreement on behalf of a wealthy Houstonian.  My hotel in Togo’s capital, Lome, fronted the beach.  One day after breakfast, I started down the path toward the beach when I came upon this sign. 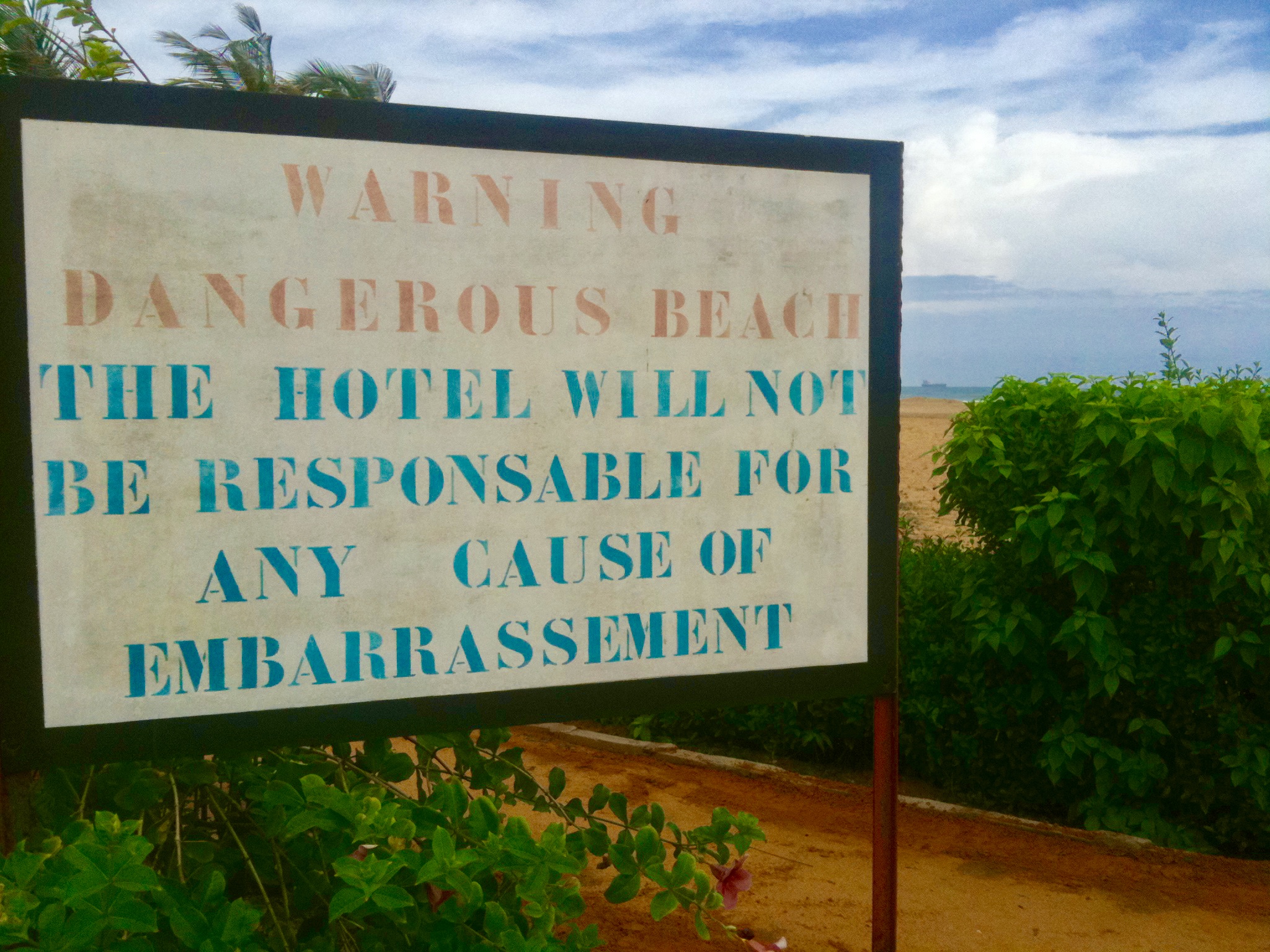 I was reconsidering my walk on the beach when a man in a white suit came over and introduced himself as the hotel’s manager.  I asked him what was the strangest thing he had ever seen at the hotel.

The best tales begin quickly, almost without pause. There’s no need to search one’s memory for the truly shocking.  Such memories reside at the forefront of our consciousness, waiting to spill out.  Witnesses want others to hear what they’ve seen.  So it was with the hotel manager.

“The strangest thing I ever saw was on this beach.  The President, who had ruled Togo for 38 years, had just died. The man was a legend.  He had survived a plane crash and several assassination attempts, including one by his own bodyguard.  The President wore the smashed bullets removed by his surgeon as a necklace, symbolic of his supposed immortality.  Togo published comic books recounting his escapades, and an entourage of 1,000 dancing girls sang his praises. 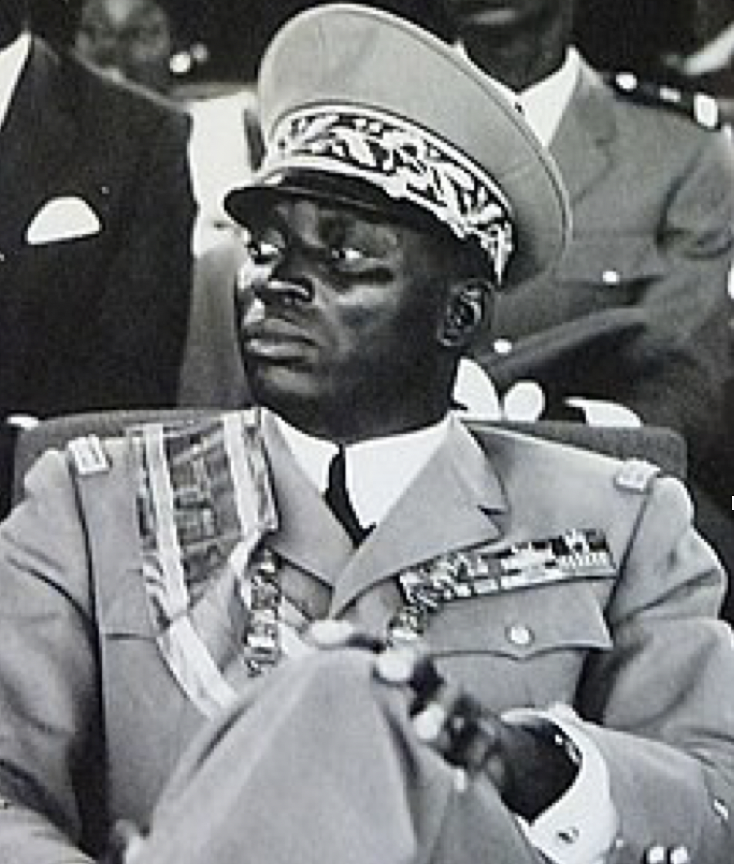 The Father of Togo

“Yet the Grim Reaper finally caught up with our ruler in 2005, when he died of natural causes in Europe.  His American-educated son was installed as the new President, leading to violence between forces loyal to the ruling family and their opposition.

“In the midst of the war for succession, I was awakened early one morning by the sound of many birds.   I walked outside my villa and looked into the sky.  There were hundreds of birds, all flying toward the beach.  I followed them down this very path, and that’s when I saw it—the strangest thing.

“As far as my eye could see were logs, implanted as columns into the sandy beach—like telephone poles.  Hanging from each log were mutilated, nude bodies being pecked at by birds.  They had been the opposition.  Now their remains were on public display, crucified for all to see.  As the day went on, friends and family who were missing loved ones came to the beach to look for them. One by one, the logs were pushed over, and the bodies taken away.

“People had wondered whether the son had what it took to hold onto power.  Was he as tough as his father?  Once I saw the crucifixions, I knew—and everyone else did, too.  The son wasn’t going anywhere. He’s still in charge today.”

I made several trips back to Togo, negotiating the Production Sharing Agreement. We were two weeks from signing when a major oil company swooped in and took our deal.  Our competitor had been tipped off by the seismic company that ran the data room for the Government of Togo. The seismic company also sent correspondence to Togo’s oil minister, arguing that the valuable offshore block should go to a large, international driller—rather than a small Houston company. What clenched the deal, though, was the  sizable bonus paid to the Government of Togo (rumored to be 10X what we had negotiated).

My client was furious.  He wanted me to immediately fly to Togo and complain to the Oil Minister and the President.  I told him the story of Crucifixion Beach, and asked whether he would like to join me on the proposed trip.  His answer was no.

In any event, it was entirely within the Government of Togo’s rights to license its exploration blocks to whichever company it preferred.  The Government of Togo had done nothing wrong by accepting the larger company’s better offer.  The bad actor in the story was the seismic company.  It was purporting to be a neutral party—the host of the Government’s data room—but actually had a conflict of interest.  If a seismic company steers blocks to its best customers, they are more likely to hire them for the resulting work.

The Houston investor filed a lawsuit against the seismic company, alleging tortious interference with the Togo deal.  Without ever ruling on the merits of the case, the court dismissed the suit on the ground that Texas was an inconvenient forum for a dispute involving Togo property rights.  The Texas courts thought that the matter was best adjudicated in the courts of Togo.  It’s a shame I never had the opportunity to tell the judge the story of Crucifixion Beach before his ruling.

For more stories like this, please read our new book, Strange Tales of World Travel.

Images available on the Internet are included in accordance with Title 17 U.S.C. Section 107.  The story above and those in Strange Tales of World Travel reflect current recollections of experiences over time and the stories we have heard. Some names and characteristics have been changed, some events have been compressed, and some dialogue has been recreated. We recognize that our memories of events may be different from those of others who experienced them. The tales in our book were represented to us as being factual. Whether entirely true or not, each story conveys meaning about a place, how someone has experienced it, and how we remembered it.