This is a guest blog authored by William Brumfield, an Associate at GAILLE PLLC. Will was a Cafaro Scholar at The University of Chicago Law School, where he earned his Doctor of Law Degree.  He received his Bachelor of Arts degree in French with Highest Honors from Southeastern Louisiana University.

If you are not familiar with the cryptocurrency world, you may want to consider acquiring at least some surface-level knowledge.  Even now, with Bitcoin and most other cryptocurrencies at a relative low point, the combined market cap of all cryptocurrencies exceeds $300 billion (down from its January 2018 high of over $800 billion).  This, after beginning 2017 with a total market cap of under $20 billion.  While much has been written about a (or the, depending on your perspective) crypto bubble, it seems established, now, that crypto is more than a passing fad, and will remain with us, even if in diminished form, for some time to come.

I concede that there are many legitimate reasons for continuing widespread unfamiliarity with cryptocurrencies.  The purchasing process is complex and usually involves multiple websites; securing your “coins” involves a stream of wallets, passcodes, and seed phrases; and the market is frighteningly volatile.  Further, the bulk of the cryptosphere exists entirely online, with a physical presence marked mostly by a modest (but growing) number of Bitcoin ATMs, technical conferences, and hardware wallets.  As a millennial who has generally been an early adopter of technology, even I find myself sometimes uncomfortable with the lack of tangibility, and surprised by the inundation of terminology, concepts, and possibilities.  But I posit that the initial frustration and continuing challenges are well worth it.

One of the more interesting aspects of the cryptosphere is the Initial Coin Offering, or ICO.  “In an ICO, a quantity of the crowdfunded cryptocurrency is sold to investors in the form of ‘tokens’, in exchange for legal tender or other cryptocurrencies such as bitcoin or ethereum. These tokens are promoted as future functional units of currency if or when the ICO’s funding goal is met and the project launches.”  Wikipedia.  Over $12 billion has been raised through ICOs, with the vast majority of activity arising in 2017 and 2018, as shown below. 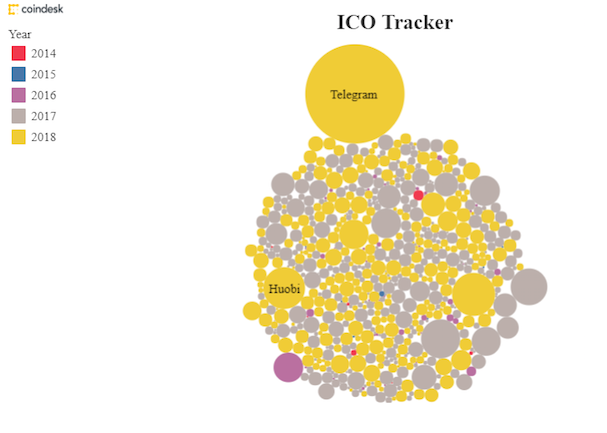 In the energy space, a disproportionate number of (semi-)established coins are electricity- or renewables-focused; Power Ledger, for example, which raised $13 million during its ICO and now has a market cap of $120 million, is an Australian coin that describes itself as a peer-to-peer marketplace for renewable energy.  The petro (or petromoneda) is a state-sanctioned Venezuelan cryptocurrency purportedly backed by the country’s oil and mineral reserves.  And a group of established oil and gas companies, including BP and Shell, plan to launch a blockchain-based platform for energy commodities trading by the end of the year.

There are a variety of oil and gas-focused coins in the pipeline, but few have yet gained traction or a particularly large portion of market share.  One, partnered with law firms Goodwin Procter and King & Spalding, is actively circulating a private placement memorandum amongst Texas investors, describing itself as an energy investment vehicle.  Although it mentions potential uses of blockchain technology—smart contracts and automated dispute resolution, among others—its focus is on using the coin as an investment vehicle, with the blockchain elements as trimmings. Its founders pitch their offering as “the first blockchain-based capital market for energy exploration and development” and as a “superior way to capitalize energy projects.” In other words, the ICO’s primary driver is similar to that of any energy equity placement—raising capital from individual investors to acquire, develop, and operate assets.

The ICO regulatory landscape remains murky, but utility tokens, which have an implicit use or value (now or in the future), are considered safer from SEC intervention than such security tokens, which are more akin to buying stock in a company that investors hope will be financially successful.  The Howey Test, deriving from a decades-old case, Securities and Exchange Commission v. W. J. Howey Co., 328 U.S. 293 (1946), but still employed today, “considers an instrument to be a security if it displays certain features, like whether profits depend on the actions of a third party or whether the instrument represents an investment in a common enterprise. … If an instrument can prove that it’s a ‘useful item’ in itself—like a barrel of oil or a golf club membership—then it can escape classification as a security.”  Joon Ian Wong, “Is ethereum a security? The answer could upend the crypto world” (Quartz, May 3, 2018).  Classification as a security, of course, leads to a host of regulatory consequences.

Unregulated ICO offerings are facing increasing skepticism from investors due to their mixed track record.  The ICO scene is ripe with scams and ill-conceived ventures.  Bitcoin.com reported in February 2018 that 46% of 2017’s ICOs had already failed, with another 13% classified as semi-failed. Deadcoins.com lists 107 “dead” coins that were scams.

Further, the Wall Street Journal recently unearthed hundreds of “questionable” coins—coins with founders who could not be independently identified or verified, some even with stock photos, or whose website or whitepaper plagiarized other, legitimate coins.  Shane Shifflett and Coulter Jones, “Buyer Beware: Hundreds of Bitcoin Wannabes Show Hallmarks of Fraud” (Wall Street Journal, May 17, 2018).  These are only two of a variety of potential signs of a fraudulent ICO.  Others include lacking (or absent) roadmaps and whitepapers; a weak online presence, including on Github (essentially a hub for development and other activity); and hype without substance generally.

Are energy ICOs worth the hassle?  While a troubling number of ICOs in other industries have failed, many have succeeded, and some are thriving.  Ethereum, NEO, and Ark, for example, were launched by ICOs—Ethereum is the second-largest cryptocurrency by market cap, and NEO and Ark’s combined market cap exceeds $3.5 billion.  Notably, all three have behind them communicative, identifiable teams, and promising technology with real and continuous development.

In order for an energy ICO to be successful, its core offering must similarly make use of blockchain technology to offer unique benefits to our industry.  Quasi-security ICOs will struggle to compete against efficient (and more established) equity markets, both public and private.  They are just a variation on something that already exists—not an entirely new application of blockchain technology.

The cryptosphere is a convoluted, scam-ridden, messy, and risky frontier.  But frontiers exist to be conquered.