How Will Blockchain Technology Be Adopted by the Energy Industry? [Gaille Energy Blog Issue 64]

How Will Blockchain Technology Be Adopted by the Energy Industry? [Gaille Energy Blog Issue 64]

The headlines may be filled with stories about Bitcoin and other cryptocurrencies—but it’s the underlying innovation called Blockchain (rather than cryptocurrencies themselves) that is poised to impact the energy industry:

“Blockchain is a special technology for peer-to-peer transaction platforms that uses decentralised storage to record all transaction data. . . .  Essentially, a Blockchain is a digital contract permitting an individual party to conduct and bill a transaction . . . directly (peer-to-peer) with another party. The peer-to-peer concept means that all transactions are stored on a network of computers consisting of the computers of the provider and customer participating in a transaction, as well as of the computers of many other network participants. Traditional intermediaries, e.g. a bank, are no longer required under this model, as the other participants in the network act as witnesses to each transaction carried out between a provider and a customer, and as such can afterwards also provide confirmation of the details of a transaction, because all relevant information is distributed to the network and stored locally on the computers of all participants.”  PWC, Blockchain – an opportunity for energy producers and consumers? (2016).

The following PWC figure illustrates how a Blockchain eliminates the need for a central institution: 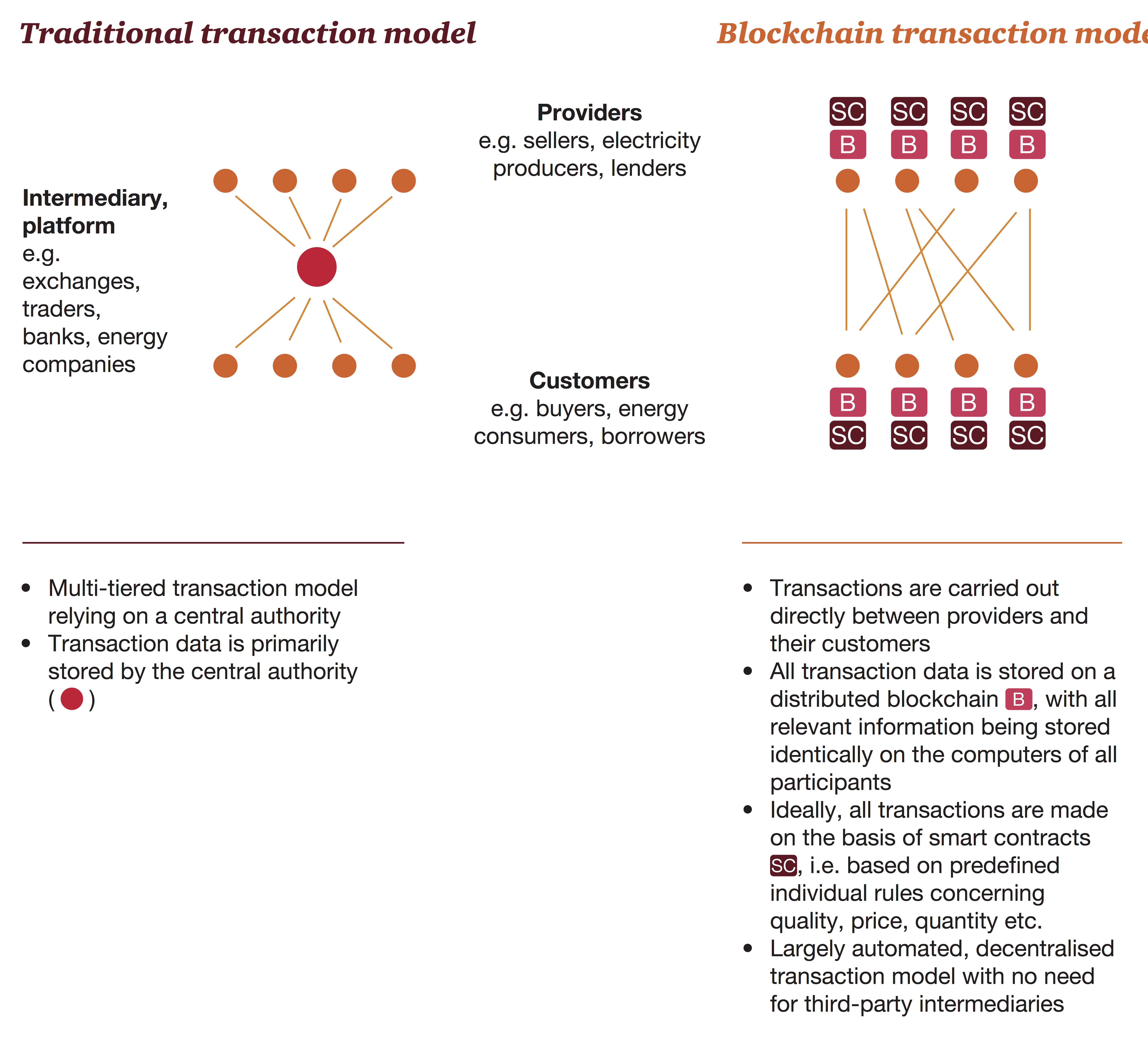 By distributing identical copies of ownership records to many computers around the world, property owners no longer need institutions (such as banks, exchanges, or governments) to verify transfers of property.  The decentralized network itself performs this function by recording information “on a ledger that is distributed across every node (i.e., computer) in a network on the internet, and is structured and encrypted in such a way that it cannot be altered without agreement by a majority of the nodes in a network (which automatically and simultaneously check the change against the ledger)” Deloitte, Blockchain: Overview of the potential applications for the oil and gas market and the related taxation implications (April 2017).   The following figures from PWC illustrate the security feautures of Blockchain technology: 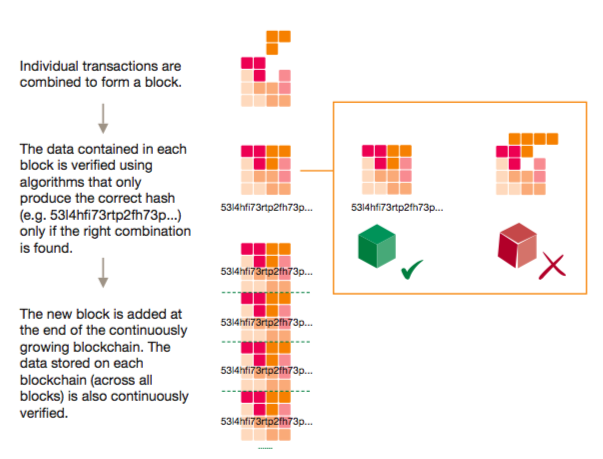 While it is difficult to predict how new technologies will be adapted, possible impacts for the energy industry include the following:

A few years ago, I had the opportunity to spend a day boating through the bayous of West Africa’s Niger Delta.  While doing so, I met a stream of rickety boats filled to the brim with barrels of stolen crude oil.  About 100,000 barrels a day of Nigerian production is stolen, with ~75,000 barrels being transferred to offshore tankers and sold on the global market.  When the Islamic State captured oilfields in Syria, it also found ways to export its illicit oil.  Blockchain technology could make such sales of stolen/sanctioned crude more difficult:

“Blockchain could provide a fully transparent and secure record of the entire supply chain.  Using a distributed ledger, digital tokens can be used to represent the asset being transacted. These tokens can be issued by a trusted authority for the needs of the companies or participating parties; for example, if oil and gas companies used a Blockchain ledger to buy and sell barrels of oil, transactions could include digital tokens named Brent or WTI. These tokens would represent the underlying asset of a barrel of oil and would remain digitally attached throughout its supply chain journey.”  Deloitte, Blockchain: Overview of the potential applications for the oil and gas market and the related taxation implications (April 2017).

Weak property rights is a significant factor contributing to political instability in the developing world:

“The great economic divide in the world today is between the 2.5 billion people who can register property rights and the five billion who are impoverished, in part because they can’t. Consider what happens without a formal system of property rights: Values are reduced for privately owned assets; wages are devalued for workers using these assets; owners are denied the ability to use their assets as collateral to obtain credit or as a credential to claim public services; and society loses the benefits that accrue when assets are employed for their highest and best purpose.”  Phil Gramm and Hernando de Soto, How Blockchain Can End Poverty (Wall Street Journal, Jan. 25, 2018).

The more secure property rights are for all citizens, the less susceptible a nation is to socialism and other revolutionary movements.  When people have little or nothing to lose (because their property is insecure), political risk is higher.

“If Blockchain technology can empower public and private efforts to register property rights on a single computer platform, we can share the blessings of private-property registration with the whole world. Instead of destroying private property to promote a Marxist equality in poverty, perhaps we can bring property rights to all mankind. Where property rights are ensured, so are the prosperity, freedom and ownership of wealth that brings real stability and peace.”  Phil Gramm and Hernando de Soto, How Blockchain Can End Poverty (Wall Street Journal, Jan. 25, 2018).

Such an effort is already underway in the African nation of Rwanda, where “the first phase of the Rwanda Blockchain project will see the Rwanda Land Registry digitized to ensure control of authenticity. This will use WISeKey’s WiseID suite of mobile applications and digitally store necessary the necessary land registry data to enable authenticity of identification and the validation of assets”  Rwanda Government’s Blockchain Project Gains Momentum (Iafrikan News, Oct. 13, 2017).

United States private mineral rights and leases can be challenging to verify, manage, and transfer.  For example, one Eagle Ford development in South Texas involved the acquisition of ~20,000 acres of mineral leases.  The leasing process required the execution of ~800 different leases, each of which required various documents to establish ownership: 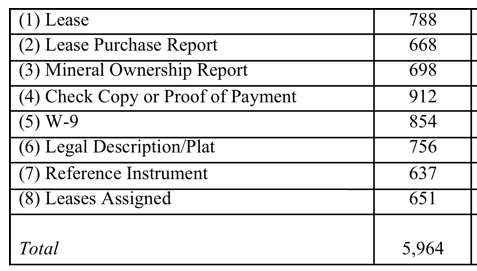 When all of the leases were signed, the energy company was left managing ~6,000 documents totaling more than 50,000 pages.  Before a well could even be drilled, lawyers then had to comb through the historical chain of title for each lease, ensuring that good title had been acquired.

Fraud is a problem, too.  Brokers have exploited the complexity of the title process to embezzle funds that were supposed to have been paid to the mineral rights owners.  Signatures have been forged, with leases being “sold” without their rightful owners’ knowledge.  Blockchain technology could be used to improve the efficiency and security of mineral leasing.

The following PWC figure illustrates how Blockchain could disrupt the traditional model: 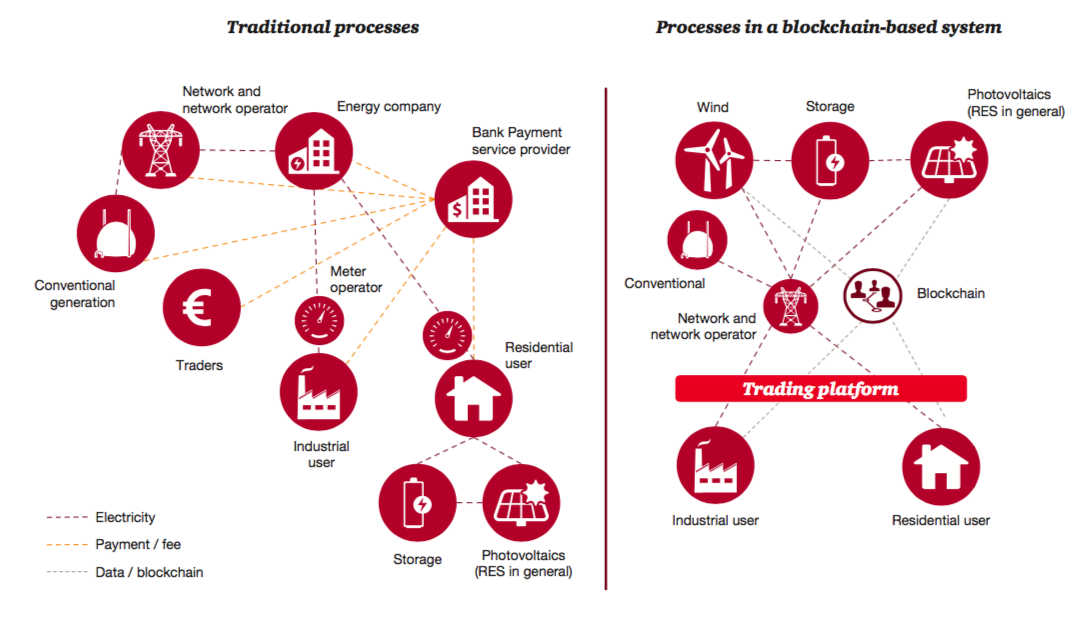 PWC’s further figure below provides a helpful overview of possible Blockchain applications in the energy industry:

“I think the internet is going to be one of the major forces for reducing the role of government. The one thing that’s missing but that will soon be developed, is a reliable e-cash.”

“The root problem with conventional currency is all the trust that’s required to make it work. The central bank must be trusted not to debase the currency, but the history of fiat currencies is full of breaches of that trust. Banks must be trusted to hold our money and transfer it electronically, but they lend it out in waves of credit bubbles with barely a fraction in reserve. We have to trust them with our privacy, trust them not to let identity thieves drain our accounts.”

Perhaps it’s not so much any specific application of Blockchain that will transform the energy industry, but its broader impact on the regulatory state.  Energy companies are both shackled and protected by governments in many ways.  As technology enables individuals to increasingly bypass governments, the status quo that many in our industry take for granted will be disrupted.