When I last visited the Venezuelan cities of Caracas and Puerto La Cruz in 2007, Hugo Chavez was sowing the seeds of the nation’s economic destruction: “Venezuela demanded changes to the agreements made by international oil companies that would give PDVSA [Venezuela’s national oil company] majority control of the projects.  Total, Chevron, Statoil and BP agreed and retained minority interests in their Venezuelan projects.  ExxonMobil and ConocoPhillips refused, and as a result, their assets were expropriated.”  Robert Rapier, How Venezuela Ruined Its Oil Industry (Forbes, May 7, 2017).  Whether they stayed or left mattered little to future investment.  The international oil industry had lost faith in Venezuela, and its capital and expertise would be reallocated to projects in other nations.

“Over all of 2017, [Venezuela’s] output was down 29%, among the steepest national declines in recent history, driven by mismanagement and under investment at the state oil company . . . . Generals with no industry experience have been named to run the [state oil company].”  Anatoly Kurmanaev and Kejal Vyas, Venezuela’s Oil Production Is Collapsing (Wall Street Journal, Jan. 19, 2018).

Venezuela’s 2017 production collapse is shown in the following figure from the Wall Street Journal:

Interviews with Venezuelan oilfield workers on Lake Maracaibo illustrate the extent to which the industry has been plundered:

“[State oil company] workers sat in empty air-conditioned offices adorned with Socialist Party posters.  Roberto, a foreman, said his oil barge had been waiting for three months to sail. Each day something was missing: food, motor oil, a tugboat. His team of a dozen people comes back each day and waits—until it is time to go home.  After two decades in [the state oil company], Roberto earns an equivalent of $8 a month. This Christmas, for the first time, he had no presents to give his seven children. . . . Of [the state oil company’s] 560 speed boats in the lake, only six are operational . . . . Supplies sent by the company to his offshore rig in the lake usually run out days before the end of the shift, he said. To cope, workers ration lunches of boiled plantain or spaghetti with mayonnaise. . . . . In November, [a] rig was attacked at night by nine pirates in balaclavas armed with machine guns. They knocked out two workers with pistol butts, took a female worker hostage and went cabin to cabin, collecting each worker’s valuables, including loaves of bread, before releasing the hostage and leaving.”  Anatoly Kurmanaev and Sheyla Urdaneta, In Venezuela’s Oil Hub, Prosperity Turns to Crime, Hunger (Wall Street Journal, Jan. 19, 2018).

The rest of the nation’s economy has collapsed alongside the oil industry:

“Venezuela, by the numbers, resembles a country hit by civil war. Its economy, once Latin America’s richest, is estimated to have shrunk by 10 per cent last year – worse even than Syria’s. GDP shrank by 19 per cent. The South American country also has the world’s worst inflation at more than 700 per cent (nearly double that of second-ranked South Sudan), rendering its currency almost worthless. In a country with the world’s largest proven oil reserves, food has grown so scarce that three in four citizens report involuntary weight loss, averaging 19 pounds in a year.”  Max Fisher and Amanda Taub, How Did Venezuela Went from the Richest Economy in South America to the Brink of Financial ruin?  (The Independent, May 21, 2017).

“Parents . . . go days without eating, shriveling to the weight of children themselves. Women line up at sterilization clinics to avoid having children they can’t feed. Young boys leave home and join street gangs to scavenge for scraps, their bodies bearing the scars of knife fights with competitors. Crowds of adults storm dumpsters after restaurants close. Babies die because it is hard to find or afford infant formula, even in emergency rooms.”  Meredith Kohut and Isayen Herrera, As Venezuela Collapses, Children Are Dying of Hunger (New York Times, Dec. 17, 2017).

Venezuela’s outcome is similar to that of other nations that have embraced forms of socialism—only faster.  Over the last century, “the effort to eliminate markets and private property has brought about the deaths of an astounding number of people. Since 1917—in the Soviet Union, China, Mongolia, Eastern Europe, Indochina, Africa, Afghanistan and parts of Latin America—communism has claimed at least 65 million lives.” Stephen Kotkin, Communism’s Bloody Century (Wall Street Journal, Nov. 3, 2017).  The difference between the 20th century and now is that technology has made capital and people much more mobile.  Even the poorest residents of Venezuela can access the Internet and compare their plight to others around the world.  Consequently, more than two million Venezuelans have fled the nation (along with their talent and money), and those who remain have found ways to bypass the Venezuelan economy using technologies such as cryptocurrency.

Yet many young Americans still romanticize socialism.  The image below is from a Young Marxist club at an Oklahoma high school. 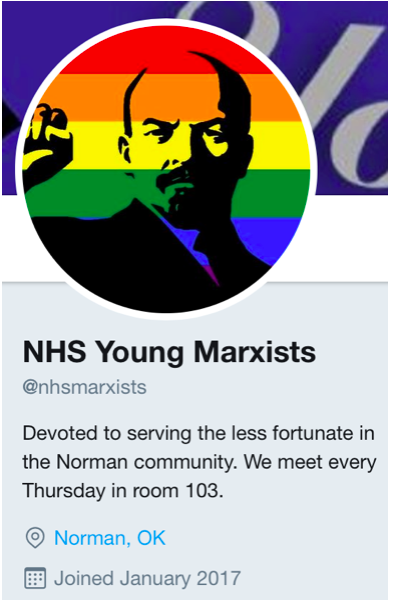 And the Communist Manifesto is the most frequently assigned college textbook in six American states.

“[B]y directing [one’s effort] in such a manner as its produce may be of the greatest value, [each person] intends only his own gain, and he is in this, as in many other cases, led by an invisible hand to promote an end which was no part of his intention. . . . By pursuing his own interest he frequently promotes that of the society more effectually than when he really intends to promote it. I have never known much good done by those who affected to trade for the public good.”

This is how the spread of capitalism around the world has lifted billions of people out of poverty.

Capitalism is why we have abundant food, medical care, technology, and transportation—and a plethora of comforts and entertainments. Notwithstanding this, “[n]early 45 percent of [American] millennials polled said that they would prefer to live in a socialist country compared to the 42 percent who said they preferred a capitalist one.”  Perry Chiaramonte, Millennials Think Socialism Would Create a Great Safe Space, Study Finds (Fox News, Nov. 3, 2017).  For every young American who pines for socialism, there’s a Venezuelan who would gladly trade places to escape it.