Last week, the Trump Administration announced that it would open new areas of the United States coast to deepwater exploration:

In a striking about-face, the Interior Department announced yesterday that it wants to allow drilling in nearly all U.S. waters, the single largest expansion of offshore oil and gas leasing ever proposed by the federal government.  The agency said it will hold 47 lease sales in every region of the outer continental shelf but one between 2019 and 2024. The updated five-year plan, required by President Trump in an executive order in April, puts regions that were long off-limits to oil and gas development back in play.  Planning areas in the Pacific Ocean and the eastern Gulf of Mexico are included in the new plan, as well as more than 100 million acres in the Arctic and along much of the Eastern Seaboard. Brittany Patterson and Zack Colman, Trump Opens Vast Waters to Offshore Drilling (Scientific American, Jan. 5, 2018).

While oil and gas investors have been focused on investing in onshore shale developments, there is renewed and growing interest in offshore exploration and development.  This has been driven in part by investors being disappointed in shale returns:

Fed-up investors are demanding that U.S. shale-oil producers make money for a change, write The Wall Street Journal’s Bradley Olson and Lynn Cook.  In the past decade, the shale-fracking revolution has made the U.S. the world’s largest oil-and-gas producer and upended global markets.  Nevertheless, shale has been a lousy bet for most investors. Since 2007 energy companies have spent $280 billion more than they generated from operations on shale investments.  Neanda Salvaterra, Wall Street to Shale: Show Me the Money—Energy Journal (Wall Street Journal, Dec. 7, 2017).

The below chart compares shale with conventional development returns:

The numbers get even more interesting when one looks at a specific deepwater project.  Guyana’s Stabroek Block on the northern coast of South America is estimated to have total recoverable resources of more than 3.2 billion barrels of oil equivalent.  On January 5, 2018, Hess announced another discovery there:

Hess’ September 7, 2017 presentation at the Barclays CEO Energy-Power Conference included the following comparison between the economics of its Guyana deepwater discoveries and shale: 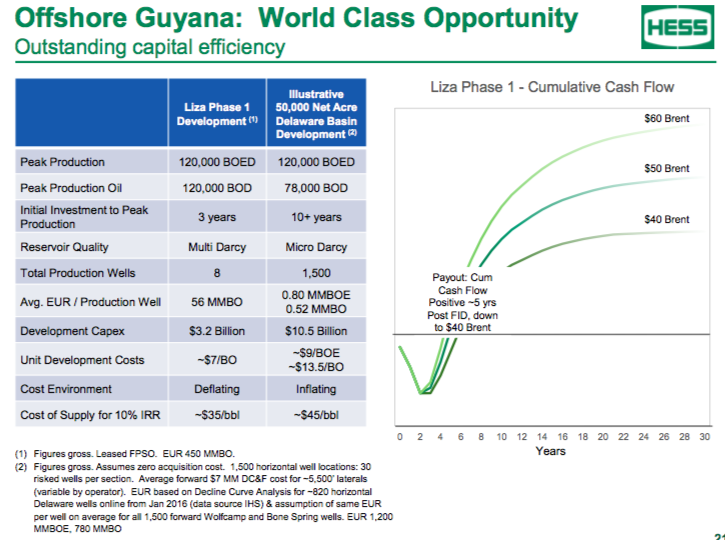 When I was Director—Business Development at Oxy from 2004-7 and President of private equity-backed West & East Africa Oil from 2007-9, my geological teams identified dozens of 200 million-plus barrel deepwater prospects on both sides of the Atlantic.  Among these were the Stabroek Block and the adjacent waters in Suriname.  Most of our prospects are still waiting to be drilled.